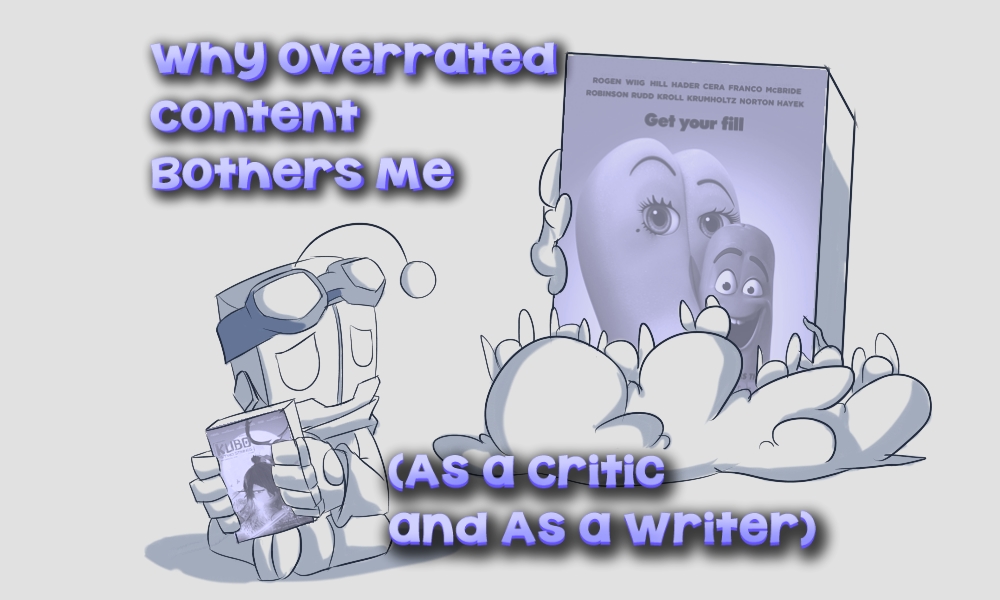 Now this is definitely a rare thing for me, considering I just got done doing an article on Legend of Zelda Breath of the Wild for my Friday article. But this will be one of those things where I have something on my mind, and it’s best to get all of my thoughts out while they’re fresh. I can’t really replicate it otherwise. So this article will not be so much as an in-depth analysis or even that well-structured, but it’s something that I’d like to share my thoughts on. Over the years, being both a critic and a writer, I of course run into a lot of media that tends to be over-exaggerated in its quality by its fans. I’m sure this is even a daily thing that other people deal with, but for the most part it seems fine on the surface. At a critical standpoint, so long as I can correctly judge something and be confident in what I think, what other people say about the product hardly matters. What’s their opinion is their opinion, and what’s mine is mine. This is obviously the written in stone rule when it comes to critique, and extremely integral when it comes to discussing opinions with other people. But, inside and behind the stone-faced critical wall, I become bothered by disagreements and I really want to show people what I mean. Hell, it’s why I take 15 minutes to construct a single sentence, I wanna make sure I don’t leave anything out. However, I can’t help but feel drowned out by the over-sized squall of general consensus and what’s popular, which is something that really throws you off as a critic. Some people might say that it’s just the usual critic inner egotistic need to bring down those heathens who dare think highly of a product that is clearly inferior, because I am correct and never wrong. Part of me is beginning to feel convinced that it is just that. But I’d like to take a second to strip away the fancy talk, the well-structured critique, and the insightful analysis for this article. If you’ll indulge me for just this once, I’d just like talk about why sometimes I can’t help but feel disappointed when something is touted as grander than it is.

This won’t be something that well thought out, and I doubt it’ll be very agreeable. But before anything, I want people to understand that most of my criticisms don’t come from a need to be malicious, and I think a lot of critics can understand that. It’s doubly so for me, because I have experience in writing my own stories, so it becomes more irksome when I see something that isn’t that great being traipsed around as a masterpiece. But again, this more comes from a place of wanting people to do better. Whenever I see something that is not good becoming popular, my initial criticisms are ones that are meant to be some sort of platform to help people understand how I think the medium should go. This is largely why I don’t do malicious-sounding reviews, outside of one or two occasions, because at the end of the day what I want from the medium is something better. So when something comes along that people consider the best of the craft while it essentially isn’t, people are given the message that that is the benchmark that creators need to set. This is largely why you start to see imitators come out of the woodwork after a popular work has hit the market, be it good or not. If imitators come anyway, it would be better to ask for something that really pushes boundaries, not something that just plays to the right crowd.

This also becomes something that bothers me from the standpoint of a writer. Being a creator myself, I know how hard it is to tangle with something for a long time to figure it out. You can’t short-change a masterpiece, making one will take years, if one will even come in the first place. It’s hard to really figure out what works, what doesn’t work, what will make people mad, what will get initial negative reception. It all has to balance out, and even trying to think about it can cause anyone’s head to spin. There are many different themes, stigmas, feelings, beliefs, thoughts, and much, much more that go into a single work. This is the secondary reason why overrated content bothers me, because it gives creators wrong ideas on how to move forward. You can’t call something a masterpiece if it nails just one concept, and even more so you can’t call something ground-breaking if it does nothing more than please a particular audience. Quality is quality, and you can’t look around that. I think many creators deserve to know what makes their work amazing, lacking, or even what just makes it stand out. No one can know if what they make is any good, it has to be told to them. What is seen from our eyes isn’t seen from others, and vice versa. So making a person’s work out to be incredible despite having many flaws leads the idea to self-destruct. Anything overly popular will succumb to backlash criticism, typical internet snark, and worst of all the poor creator will have no idea what went wrong. This is why, from a writer standpoint, I sympathize with people who make something that just happened to land at the right moment only for it to come crashing down with little reason. A creator is literally blind to his own work. If something doesn’t work, I need to be told about it, and not in ways that either end in empty praise or malicious snark. Everything that rubbed someone wrong, everything that made the product lacking, and everything that I can do to make it better. This is why, as a writer that tries to do his best in creating something original, heart-wrenching, and great, I can’t stand it when other people throw words of praise around like candy. Something that loosely judged will always turn sour in the end.

The last reason is actually my inspiration for making this article in the first place. I’ve come across a lot of movies, anime, and video games that I can’t even describe in 10,000 words about how grand they are. A lot of the world is under the impression that if something is good, then it will get attention. Unfortunately, that just isn’t the case. I just recently watched for the first time Kubo and the Two Strings. I had heard good things, but I never really considered it to be that popular. After watching it, I’m flabbergasted that this movie wasn’t a constant topic for when it originally came out. It’s beautiful, thought-provoking, and most of all something that literally anyone can watch. It’s one of the very few movies that I can recommend to anyone regardless of age. But for some reason, it didn’t get a lot of attention. I can’t recall it having that big of a backing, and I think I only saw the trailer once in theaters. I had never even heard of the studio that worked on it. So as is customary, it came and went without a lot of a peep, and managed to make back only a bit above its cost to make.

But the part that really disheartens me is when I see movies like Sausage Party making hand-over-fist because of their marketing. I was someone who saw Sausage Party in the theaters, and I wish I could’ve taken that money and given it to the people behind Kubo. It’s clear to see which of these had the passion, the purpose, and the creativity to try and make something great. But Kubo just barely made back a bit over its budget, with Sausage Party making literally 10 times what it cost to make. But it was able to do so because it labelled itself as something different, something raunchy, and something willing to go the extra mile. But when I walked into that theater, what I got was nothing more than a filthy-written script, ugly designs, pathetically weak comedy, and an unbelievably forced message that it could not wait to beat you over the head with. The sole reason it got the attention it did is because it knew how to play to the crowd and it knew how to sucker people in. It doesn’t matter what the movie was trying to convey, because at the end of the day, it was nothing more than a bad movie. Having a message means nothing if the message is covered in an awfully-written story. Kubo’s message has been done before, and may have actually been done better, but I’ll easily watch Kubo 10 more times because of how much I loved everything else about it. It begins to feel like what studios are trying to do is nothing more than playing to the crowd, and a passion-filled project like Kubo is tossed aside because it seems like no one cares about just a good story anymore. This is why it’s important to keep an open mind, and not fall victim to something that is just popular. It’s in my second nature to second-guess everything, and my opinions are constantly shifting to meet as close to a proper critique as possible.