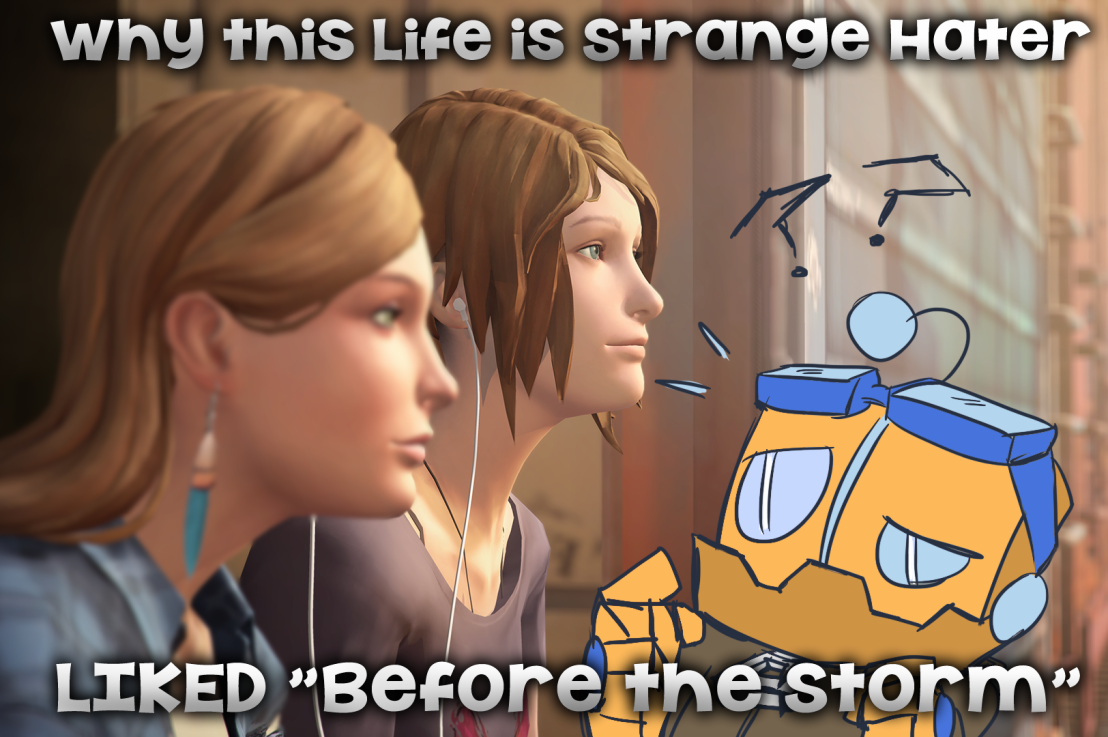 Well it’s been about 87 years since I updated this blog. Long story short, a long story happened, and there is no real way to shorten it. So now that the placeholder explanation out of the way, let’s get crackin’! A while ago, I wrote a review on the episodic choice-making game Life is Strange, and I got vicious. I did not like any aspect of the game, save the pastel visuals, and it still has a burn in the side of my brain that resurfaces occasionally. It’s like that time you said a thing to your friend and he just kinda winces and starts foaming at the mouth and drops to the floor. Yeah that’s me. But despite my spasms, the game garnered a ton of attention and awards. So much so that a sequel-prequel was announced this year at E3, known as Life is Strange: Before the Storm. To my surprise, Dontnod was not involved with this project, and the developers at Deck Nine took up the reigns to make this game. The series this time only features 3 episodes, the first of which has already come out. Now despite my post-traumatic stress concerning the first series, I’m always willing to give the next game of a series a shot. I could go on an hour-long explanation saying why, but I’ll just leave it at I’m too bored to hold onto grudges. But with more and more footage that came out over the last month, it seemed like it was gonna sink into the same mess that the first series caused. The first 20 minutes of the episode certainly didn’t help, with everything I’ve come to expect out of the concept with awkward dialogue and clunky plot direction. Chloe being at the helm instead of Max really drove up the times I wanted to put my head underneath a tire to boot.

But a strange and shocking thing happened after the intro. An unprecedented sensation, a conclusion I didn’t see coming, and a revelation of the highest magnitude was laid before me. I actually liked Before the Storm. Just coming to that realization after my playtime with the first episode was something I just could not believe. But after ruminating and breaking down both Before the Storm and the original Life is Strange series, it was pretty easy to see why the sequel surpassed the original. And that is the subject of today’s topic. This won’t be a review, per-say, just a quick little analysis on both series and where the discrepancies lay.

So instead of Max Caulfield, players now control Blue-Hair McBitch Chloe Price, 3 years prior to the original series’ events. In this, I was very concerned about how quickly I was going to bash my TV. But, shockingly, Before the Storm is not even close to the levels of cringe writing that the original did, ironically now that Chloe is the player-character. Changing the writing style to be far more appropriate in the appropriate scenes probably helped. Along with the complete omission of memes. It seems like even people who liked the original noticed how awkward the writing was, in both monologues and standard dialogue. Now Before the Storm isn’t wholly innocent when it comes to pretty absurd and awkward writing, like the abundant usage of middle fingers for no apparent reason, but unlike whatever disease-ridden beaver was in charge of the dialogue direction in the original, Before the Storm’s writing is on point in critical moments. Again, there are moments that seem to have sneaked in from the original where there is a touch too much exposition, but it restricts dialogue at important moments and really nails the drama aspect. For example, the original Life is Strange had many moments where it felt like it just told you plot points. Max falls out of contact after moving and after Chloe’s dad gets RKO’d by a dump truck. 5 years later, Max has somehow zero contact with Chloe, Max moves back, Chloe bitches about it. These are all told to the player, and it feels disjointed as a result. But in Before the Storm, there’s a text exchange between the two after Chloe’s dad died, and it’s the token “we should get together” conversation that everyone on planet earth has. Only, while the conversation was more lively in the beginning, near the end after several months, it’s just Chloe sending messages, and the whole exchange ends with a singular “Max…” with no response. Now THAT is how you pull off subtle drama. This is a much more believable scenario that a lot of people have, and Chloe’s desperation comes through much clearer.

And on the subject of drama and characters, Before the Storm is overwhelmingly better than the original in terms of character development. The reason being is that you can’t tell who they are by just looking at them for a fucking nanosecond. I couldn’t always nail the archetypes of characters, and even ones I thought I did ended up throwing me a curveball later. This is proof of good character design, because I don’t really hate any specific character unquestionably and I can’t always figure out who a character is. I’m also relieved that the most important character to nail was Rachel Amber and they did just that. Considering her whole existence was an awkward and awful driving force for every single character motivation in the original series, it’s nice to see her character actually fleshed out. As I said in my review of the original series, having an unquestionably glorified ultra-character who is also not even there is one of the worst things you could use for a driving force. While in Before the Storm she’s still sort of the all-rounded super-character, there’s a bit more going on. Unlike Chloe in the original series, Rachel is a very charming character. She does give off that feeling of being able to be everyone’s friend, an aspect that the original series just fucking threw out there and constantly tried to make me believe it. I like her blissful demeanor, her subtle insight, but most importantly, I like the strife that she’s feeling. I was deathly afraid of getting a subpar character in which would both ruin Before the Storm and make me hate the original series even more, but I can say that they did great.

Thirdly, one of Life is Strange’s biggest problems was it trying to juggle two different plots and failing at both. The supernatural edge was interesting at first, but it was soon forcefully shoved into the background while significantly less interesting and less realistic things happened to characters I had no attachment to whatsoever. With Before the Storm, there is only one singular story, and that is Chloe’s search for friendship. Now that the game has a laser-focused narrative that doesn’t have to do with the whole town exploding, it can indulge a bit in the smaller moments and I don’t feel like it’s a waste of time. I enjoy talking to these characters now that the dialogue has been cleaned up. I actually like seeing who the characters were before they became the …uh, legends they become in Life is Strange. Hell, you can play a 20-minute DnD campaign at one point, which doesn’t seem to go anywhere, but hey, what a neat little addition. And I can enjoy these neat little additions because the plot doesn’t force them to uncover drug rings, dig up bodies, and stop a massive force of nature through the power of LOOOOOOVE. The emotional beats feel more powerful, and I can enjoy the small stuff because it took the time to build a narrative and didn’t drop the disaster card in the first 5 minutes.

Considering how much I hated the original series and how much I liked Before the Storm, I dug a little bit deeper and found out not only was the development team different, but even the writing staff. The writers and developers at Deck Nine Games took the extremely appalling mess of a story the original series was and ended up making something I actually enjoyed. Now of course, this is the first episode, and it still has two more to fuck things up, but considering it flipped around my entire outlook on this thing, I can say I’m optimistic at least. So to wrap this all up, Before the Storm episode 1 was a pleasant surprise and part of me wants Deck Nine to be in charge of the actual season 2. But alas, that shan’t happen, as Dontnod are once again at the helm for season 2. Which means that lines about Frank’s beans aren’t completely lost to the ether.